He was 39 years-old at the time he went missing back in 1968, and his body has finally been found about six hours Northeast of Boise.

His name is Raymond Jones and he's from the small town of Salmon, Idaho on the Idaho/Wyoming border. Jones "was bow hunting for mountain goats in the east fork of Hayden Creek in Lemhi County when he was last seen on Sept. 7, 1968", according to eastidahonews.com. An official search was launched back in 1968 when he went missing was ultimately called off when they couldn't find him. At one point, someone spotted some footprints thought to potentially belong to Raymond Jones so another search was made but eventually, that too was called off.

Fast forward 53 years to the month: This past Friday, September 17th, 2021. Another bowhunter was in the area and stumbled upon the remains of Raymond Jones and called the Sheriff's Department. The following morning, Saturday the 18th, officials made their way out to the area and found his wallet with literal identification in it, ending a 53 year-old Idaho mystery. Raymond would be 92 years old if he was still alive today and actually, his wife still is. Officials were able to let his wife and family know that his body had been found, hopefully providing a sense of closure after so many years. Also according to eastidahonews.com, Sheriff Penner pointed out the odd coincidence of one bowhunter finding another bowhunter a full 53 years later while hunting in the same area, "It’s pretty wild, ain’t it? You have another bowhunter looking for a shortcut who stumbled upon a bowhunter from 53 years ago." 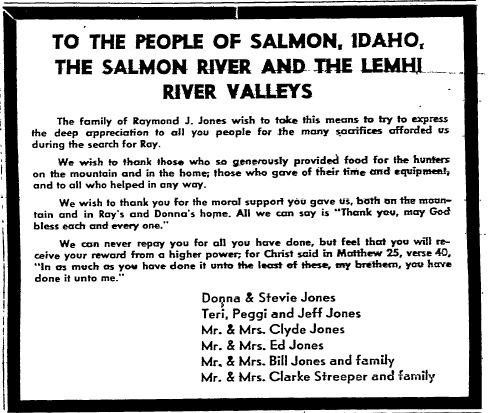 Get our free mobile app

Need a refresher on what a gorgeous state we live in? Escape for a moment and enjoy all four awesome seasons with these 25 stunning photos...
Idaho is a massive state with almost every type of climate zone and miles and miles of endless beauty waiting to be photographed. Let's get lost in its beauty by taking a scenic tour of our state!

Meet the K-9 Unit of BPD

These are some good doggos

Idahoans Embarrassing The Rest of us in National News

I'm feeling second-hand embarrassment over here
Filed Under: 1968, body, boise, bowhunting, hunter, Hunting, Idaho, Moug, moug and angie, mystery, newsletter, raymond jones, remains, Salmon
Categories: Local News, On-Air, Outdoors
Comments
Leave A Comment
Finally! A Simple Way To Teach People How “Boise” Is Pronounced
Creepy Video Taken in the Mountains of Idaho Remains Unexplained
Poor Elk, Fish & Game Just Found an “Elk Boneyard” on Craig Mountain
This Unsolved Mystery is One of Idaho’s Creepiest of All Time
How to Begin Working as a Bounty Hunter in the State of Idaho
8 People Are Currently Missing in Idaho, Have You Seen Them?
How Did We Not Know What the Numbers on These Idaho Hills Mean?
Idaho Fish and Game Preparing Emergency Hunts to Widen Test of Chronic Wasting Disease in Idaho Deer
Dinner Idea: The Empanada Club In Meridian